Tangible goals are key to any project. Without them I feel like I’m peddling up a steep hill just so I can peddle up some more. Scheduling and time logs showing time spent are great for statistical and historical purposes, but in the scheme of things can do little to save a project if you and your team lack that motivation needed to push the last mile. Countless indie games die from loss of interest. I’ve had several of my own projects fall by the wayside as other opportunities popped up that seemed more “fun”. As they say, the grass is greener on the other side :). But I would argue the overall motivation for those failed projects didn’t dropped per-say. It was just that a particular type of motivation wasn’t effective at getting that project done, and that the person failed to cultivate the right type of motivation to see it through…

When it comes to goal setting I tend to write my short-term, concrete goals down in some form. That list takes the form of a weekly schedule and to-do list. The longer term goals, such as “Finish game X” or even loftier ones such as “become a full-time independent developer” or even “Travel…somewhere…anywhere” kind of stay in my head constantly nagging away at me :). I find that when I’m not working directly on my game for a period of time the long term goals rear their head and eventually guide me back on course. But interestingly enough, the second I sit down in front of the computer to work my long term goals go out the window and short term goals kick in. This has had some pretty compelling implications on my work habits.

Some weeks I tend to faff about a good bit on YouTube, TED, RSS, IM, and other things throughout the work session. This happens even when I’m fully aware of the devil that is the internet. Now what happened between the time I was driving home from errands all hyped up about getting my game done and sitting down in front of my computer to make that dream a reality? I feel like my long term goals aren’t pushing me along anymore once I’m in a position to do actual work. What I’m finding is that I’m constantly looking at my to-do list and reminding myself how great it’ll be to finally have a a a good GUI system implemented this week to make the game hopefully look a little more…professional? I’m looking forward that following weekend to have a new build to push out to beta testers. I’m not looking forward to finishing game X on any given week, but finishing feature Y or bug Z. The important distinction here is that those short term goals have tangible results that are more easy to visualize while working.

Yes, I’m saying I have no idea how Tilt To Live will end up, I can only guess at that. I have a clearer image of how feature Y should work though. Maybe I should chalk this up to inexperience? It just seems so weird to me that there’s some sort of internal switch in my motivation based on the context of where I am at or doing at the moment that decides whether short term or long term goals will be the most effective. Realizing this will help push me more to create better weekly schedules so that my short-term goals are more tangible.

This seems obvious when you think about it, but I started thinking about how this applies to other things in life when I came across The Buried Life while listening to an Adam Corolla Podcast (doing laundry at the same time so not completely faffing about!). How many goals do people never see become a reality because they experienced my errand-to-computer dilemma? They got all hyped up about an idea, but when they were on that edge of opportunity they backed away not because they didn’t want to do it, but because they simply didn’t have any short term goals to push them over that edge? I’ll leave at that for now as it’s a bit heavier topic that I simply don’t have the time or qualifications to fully analyze at the moment. Back to my indie task at hand… 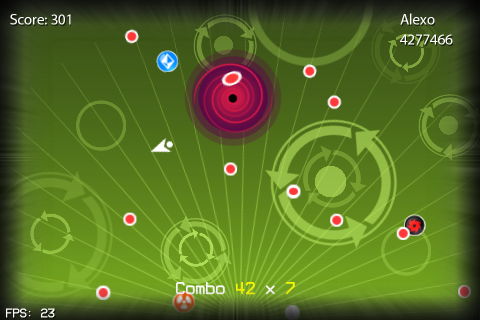 Work in Progress Screenshot of “Tilt To Live”

As I’m approaching the final legs of production (and starting to get my shit together for promotion and marketing) tangible goals are harder to find and smaller. In the beginning, having a playable mock up was a huge step forward that could be completed in a single week. Nowadays it’s about getting X animation doing Y exactly correct so it’s timed with the audio to give the best feedback for the user. The amount of effort for both tasks is about the same, but the return on investment for me as a programmer is much smaller when doing these polishing tasks. But I know polish on a good game is what pushes it past “ok” to “good” and gets people talking about it.

In a large project, such as indie game, having long term goals are essential to getting you and/or your team to jump on the project. Without those short-term goals feeding your long term motivation, your motivation eventually starves and the project slowly dies. 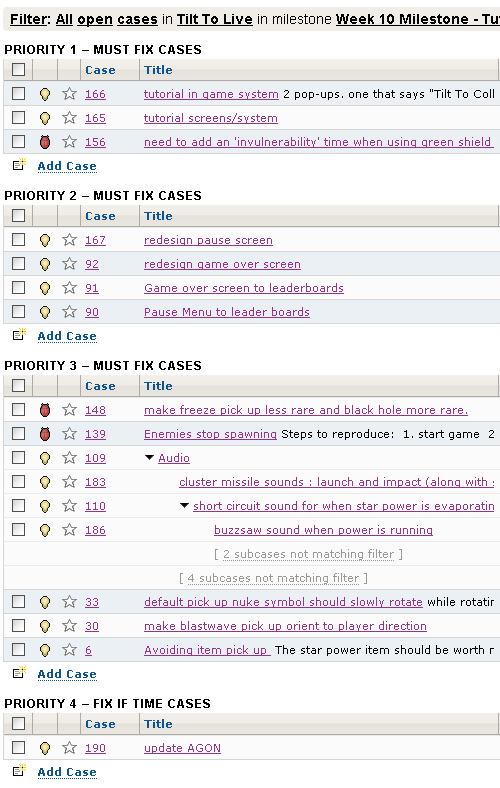 By Saturday that list will hopefully be empty, but it’s not the empty list I’m excited to see, but the fact that I’ll have a first pass of a tutorial system in the game by the end of the week :). Looking at this list I can tell my “scheduling skills” were a bit lacking and I know most if not all of the priority #2 cases will be moved to the following week because this week’s goal is to implement and polish a tutorial system. Hopefully, this won’t translate to another hour long fall through the rabbit hole they call the internet :|.

Oh, and in case anyone is wondering what task management system I’m using, it is called FogBugz. It’s been a treat to be able to use such a robust system, even if I’m a single developer.