Ahh, my first idevblogaday post! For those that don’t know, idevblogaday is a group of indie dev bloggers started by Miguel Á. Friginal of @mysterycoconut games to get developers blogging more regularly. So we’ll see how that goes :]. After finishing the initial release of Tilt to Live I had been wanting to gather up my thoughts on what I had learned about making a game that is heavily dependent on accelerometer controls. Sadly, this was on the back burner for the longest time. I eventually got contacted by Noel Llopis of Snappytouch and through some e-mail conversations with him I was able to get some of my ideas finally in writing. So now, I figured I’d take that and present it to everyone to see, learn, and laugh at my horribly awesome code.

I want to give a quick and dirty history of Tilt to Live (TtL). This is not a post-mortem quality account (That will come later), but something so readers have a context of how TtL evolved and where it came from code-wise. TtL was the first app I wrote for an iDevice platform, ever. First time using a mac regularly, first time using XCode, first time using Objective-C. There were a lot of firsts. Typically when I’m learning something I don’t bother with style or best practices, or platform specific conventions. I learn all that as I go. TtL has come a very long way from the first iteration of it. 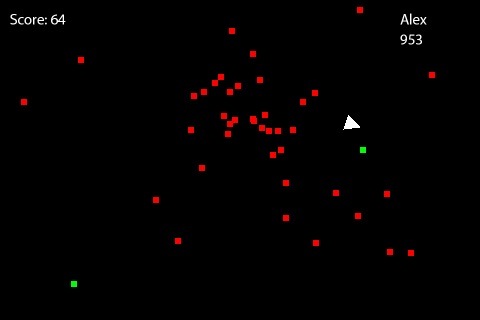 The first signs of things to come! The green dots are what are considered the ‘nukes’ in today’s TtL. 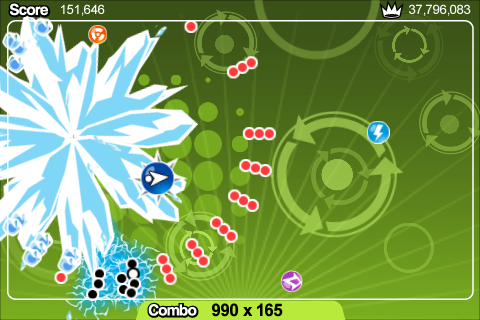 While the game is pretty, thanks to Adam's Awesome Art (AAA quality!!!), the code at times can feel like one giant ugly beast. Usually  when I'm in an environment I know well, I write a prototype, then start over and write the game ‘correctly' so the code can be maintainable throughout. Not so with TtL, this game evolved straight from prototype hack-a-thon to full on production code. The code base went through lots of rewrites, refactoring, and dubious ‘fixes' to keep things somewhat on the side of sane. On the bright side, I now have a much clearer idea of what ‘maintainable' code shouldn't look like and a lot of design decisions I know to make earlier on in the coding process to avoid some clunkiness in the future. There's certainly something to be said though for making it ‘just work' because in the end, no one gives a damn (except the author) how it's written as long as the game is fun :].

With that said, I'd like to talk about some of the design issues we came across while developing TtL's tilt controls.

Our main area of focus on ‘controls design’ was how to present calibration to the user. Overall, we had a very minimalistic approach to the game’s user experience. We wanted minimal taps to get into the game, and once in the game, all you did was tilt to interact. Naturally, having calibration be automated seems like the ultimate in minimalist user-experience. The user doesn’t even experience it. It’s supposed to “just work”. So how did our calibration work initially? Well, when the game counts down on ‘3,2,1’ and the ‘1’ disappears the game calibrates at that point in time as the neutral position. Also, when the player unpaused the game, it would recalibrate. Sounded great, and it worked great…if you understood how it worked. From playtesting we found:

So what happens when we decided to tell users that pausing and unpausing the game would recalibrate the game before they played? We did that as a quick way to emulate ‘custom calibration'.

Well, since we wanted to appeal to more than “hardcore” (I use that word very loosely here) iPhone gamers we had some take aways from the testing:

So after brainstorming a few ways to present a new calibration screen, Adam had a pretty unique idea compared to most tilt-based games at the time: 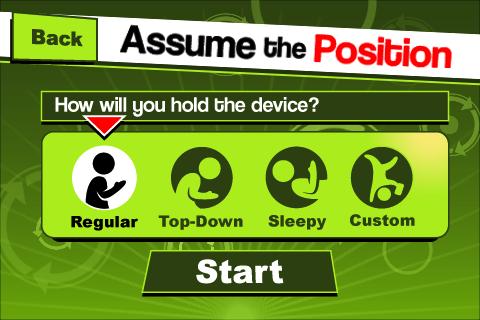 While we thought it was a good idea and it playtested well, we didn't think the preset choices would resonate with users as much as it did.

“The game has some of the best options I have found for customizing the tilt controls.” -Nate Adcock, iphonelife.com

“For those of you worrying about manual calibration, don’t.” -nodpad.com

“Unique to this game is a calibration option that provides three default control schemes that should satisfy most positions that you’d like to hold your device in.” -Ben Briggs, gamesuncovered.com

Players and reviewers alike seemed to respond positively to our approach of essentially what is just a common preset list. The regular setting works for the vast majority of play cases and top-down works great for the purists. Sleepy was a rather experimental one that has mixed results. It works for me, but if you ask a group of players to play in a “sleepy” position you’ll most likely get a higher variance of orientations than what “regular” and “top-down” imply. I don’t think our technical implementation of tilt controls was any more accurate than the next game’s, but I feel because the user was able to more accurately set the game up successfully with a reduced number of choices their experience was much more positive.

Design issues aside, the technical side of my approach to tilt controls had a few issues I had to overcome as well. The first and biggest issue was a limitation of how I went about calculating the tilt offset. As the calibration of the iPhone approached a purely vertical orientation, detecting horizontal motion reduced to zero pretty much. To counteract this, I added an additional control scheme for when the device was in such a position and require the player to move the ship by “steering” the iPhone instead of tilting. Not the most ideal situation, and with the advent of the iPhone 4’s gyroscope this could probably be mitigated. There are certainly ways to implement tilt controls on the 3G/3GS where this isn’t an issue, but I haven’t had much time to experiment with them yet. I’ll certainly post an update on my findings as I get to them.

The 2nd issue was noisy accelerometer data. I had experimented with filtering the raw input, as per Apple doc recommendation, but in the end I let the input through unfiltered and just altered the rendering of the ship. Rendering the ship’s orientation based on the raw data caused the ship to shake uncontrollably as if it was hyped up on speed. Also this would make it impossible to use any weapons that required aiming. Solving it was pretty basic as I just added an interpolation function that would ease the ship to the current desired orientation over a couple of frames and adding a dead zone so that players can sit still without spinning wildly. I’ve played a few tilt-based games where the players’ avatar had an orientation and no dead zone was implemented. Be nice to your players, add a dead zone at the very least damnit.

A 3rd but minor issue was with sampling rates. I sample the accelerometer at 30hz and TtL runs at 30FPS. When (not if) the FPS start dipping the accelerometer data seems to get a bit out of sync and you start seeing small jolts of movements from the accelerometer data that came in between some of the frames. TtL doesn’t do much in managing varying frame times (shame on me), but this problem hasn’t brought much pain so I’m not looking at it worth fixing yet.

Well how does it REALLY work?#

For those that are still reading this and are curious to see how it’s implemented I’ve attached a sample XCode project with the implementation that TtL uses. I took a GLSprite sample project and mutilated it until it resembled a sufficient “tilt controls sample”. The approach I had in mind was to make the iphone function as a “reverse” joystick. I’m not even going to try to explain WTF that means in text so here’s a poorly drawn illustration:

I  interpreted the accelerometer data in a way that would project a vector that always pointed away from the screen of the device. I would use this to find the difference vector between it and the ‘neutral' position (blue) and finally project this onto the 2D plane of the screen to give me a velocity. The green arrow is what the player's velocity was set to. So when the neutral position and inverted accel data are very close to each other, the player's velocity is clamped to zero (deadzone).

You'll find in the sample project that all the relevant accelerometer logic is implemented inside the TiltPlayer class in the ‘accelerometer:didAccelerate” method. Inside the TiltPlayer's ‘update' method it handles the smoothing of the icon's rotation to reduce jitter. The rest are just supporting classes for rendering and other boilerplate code. So for those that wish to just see the pertinent code without firing up XCode, here it is:

if you want to download the XCode project, you can grab it here. [note: updated with Mikko’s more concise version below]

That’s it for now. As always, feedback is welcome and if anyone takes that code and improves it, it’d be nice to know :].

Thanks to Mikko Mononen for making the code much more concise! Below is the altered method with Mikko’s contribution: