I’ve been slow on the blog updates lately mostly because the times I use to write were taken up with me being out of town. Just got back from an awesome weekend trip at MLG Orlando. For those that don’t follow that area of gaming, MLG stands for Major League Gaming, and is essentially a league for professional gamers to compete in. Starcraft 2 has taken off in a big way in the MLG, considering only a little over a year ago MLG was pretty much dominated by Halo and Call of Duty. Seems the SC2 crowd is dwarfing the other competitive games at the show. So gooo SC2! 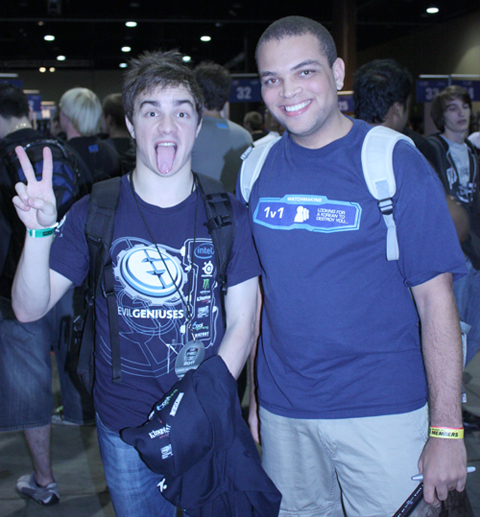 Taking a picture with pro sc2 gamer EG’s Chris ‘HuK’ Loranger. Happy after coming off another win in the tourney I’m sure.

Anyway, to relate this to indie development one idea that struck me was how similar those involved in sc2 competitive play are to indie devs themselves. Most likely other professionally played games are like this as well, but I can’t speak for them directly. Even more interesting is the fascinating stories of those that don’t compete directly but are community figures and support the community in other ways. Casters such as Sean ‘Day[9]' Plott, Nicolas ‘Tasteless' Plott, Dan ‘Artosis' Stemkoski now make a living off of their passions in a career path that barely existed 5-10 years ago. They now all often commentate pro matches and serve as hosts to Starcraft events around the world. It’s one thing for pro gamers to make a living playing games professionally. Pro gaming was on the ‘fringes' years ago, but is becoming more viable these days. But to think that people such as casters, and even popular gamers who stream their gaming sessions (such as Steve ‘Destiny' Bonnell) are now doing these things full time is mind-blowing. I would almost call that the epitome of the ‘American Dream'. Taking your passion and then pursuing it to the point where your passion becomes your means of living, even if a there’s no obvious or immediate way to make a living off your passion. Indie devs certainly fall in that category, but it’s a tad easier to swallow that a developer makes a tangible product and then sells it, which is more in line with a standard small business lifecycle these days. These guys, they are the product. Pretty fascinating to think that their careers revolve around a single video game! Now I say almost ‘_American Dream‘_ only because half these casters don’t even reside in the US, they live in South Korea and are apparently loving it. Getting to travel the world, attend global tournaments, doing what you love? That’s a win in my book.

In other news, Outwitters is still deep in development. Finally got the universal build up and running but the iPhone version is still rough around the edges. Hopefully after things start to stabilize we can start testing with a wider group of testers. I had a game with Adam earlier this week that I was certain I would win, only to lose…yet again. Maybe one of these days it’ll click with me and I won’t appear to be strategically retarded.