Hurray! Finially got to a stable stopping point in porting over Farseer Physics from C# on XNA to Blitzmax! Farseer Physics Engine is a 2D physics engine originally written by Jeff Weber who develops XNA/Silverlight games over at Farseer Games. Much thanks to him for creating a great physics engine and for allowing me to move it to another language, which once done, I hope will help others create fun physics games in Blitzmax. 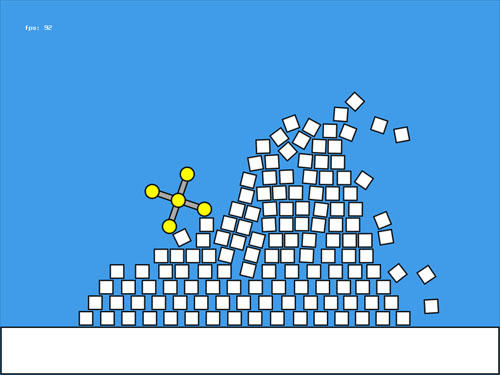 Currently, the Blitzmax version is using the ‘SelectiveSweep' Broadphase collider that is the default collider in Farseer, and is supposed to have the best performance in a wider range of scenarios. The others have their advantages and disadvantages based on specific situations in the physics environment. I’ll be implementing those as well along with the rest of the list, but they weren’t used in the current build of the C# Farseer demo application so I chose to focus on the needed classes first to get an identical demo app running in Blitzmax.

Just some metrics you may find interesting (as I’ve noticed typical Blitzmax users have a very different way of developing their games):

– 84 .bmx files used for the physics engine and the demo application
– 7957 lines of code (blank lines not included)

Sounds like it may be a lot, but in reality it really isn’t much compared to a full relatively complex commercial Casual, Indie, or AAA game. But the reason I put that up there is to illustrate a point. I feel like if I was using the default Blitzmax IDE I would’ve have one hell of a nightmare just handling these little files. Having a project of a much bigger scale in BlitzPlus in the past, I know from experience the headaches of a large monolithic code base. You spend a lot of time scrolling and searching through files because the IDE promotes that type of behavior from the get go. Using BLIde, a very flexible editor created by Manel Ibáñez, productivity went way up and I was able to get more done on the physics engine. Not to mention built in Intellisense support is a god-send, which lets you spend more time coding instead of reading API docs. Just that feature alone I think is enough to abandon the default IDE and stick to BLIde. Anyway, if you’re a Blitzmax user I highly recommend that you take the time to learn to use BLIde and support Manel’s efforts for an outstanding product!

I’ve uploaded a demo video showcasing the same demos available in C# running in Blitzmax. I also added a new and original demo by me showing the use of concave polygons, which is one feature many 2D physics libraries lack. With other physics engines you can emulate concave shapes by putting together a bunch of convex ones, but it’s still a cumbersome and tedious task. The ability to create concave shapes with minimal hassle is a great productivity boost for content creation in your game. Below is a video of the physics demo app, along with a download link to the demo app itself so you can run it on your own PC. Hope to have more info posted with updates in the coming weeks!